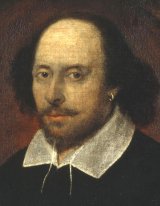 The Chandos portrait; read
about the Cobbe portrait
here and in the Guardian.

'There's magic in the web of it' (Othello III.iv) - so here are some choice sites for Shakespeare surfers. Online editions are listed first - after all, 'The play's the thing.' Some of the text sites also contain valuable additional resources, so there is some overlap between these lists.

As well as the usual sources of online texts, such as Project Gutenberg, there are a number of sites dedicated to Shakespeare:

Bate's great book
These books are likely to be useful in the first instance for AS and A Level teachers - students could be directed to suitable sections: